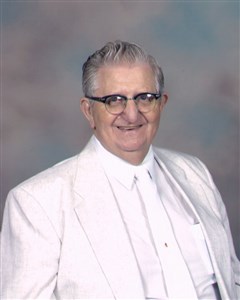 He was the son of Otis Henry and Emma Augusta Heberlein Tournear, born on August 22, 1932, in their Liberty, IL, home. They preceded him in death, as did his three brothers, Carl (Audrey) Tournear, Walter (Millie) Tournear and Russell C. Tournear (who died in infancy); and one sister, Naomi (Leonard) Jergens.

He graduated from Liberty High School at 16 years old and did his undergraduate work in accounting at Carthage College when it was still in Carthage, IL. Then, he continued on to get his Masters of Divinity degree at Christian Theological Seminary (Indianapolis) and Missouri School of Religion (Jefferson City, Missouri). He served 42 years as a United Methodist Minister and, after he retired, he filled in for other pastors and served as an interim pastor for churches in transition.

He was involved in Consistory, Kiwanis, Rotary (wherein he was honored as a Paul Harris Fellow), Scottish Rite, Mason (and was Most Wise Master several times, Chaplain, and past Master), and Bloomington York Rite. He was a member of the American Passion Play in Bloomington, IL, for 33 years, in which he played several roles, including that of the apostle Peter. He was instrumental in forming an ambulance service at both Knoxville and Wyoming (IL). He traveled to the Holy Land 3 times, was chaplain of the day at the Illinois House of Representatives and gave their invocation for that day. He was faithful to the Cubs, enjoyed spending time with his wife, Charlotte, going out for meals, and telling amusing stories from his childhood during his sermons. He has been to the UN twice and met some extraordinary people, including Adlai Stevenson, Robert Kennedy, Martin Luther King Jr., Bishop Abel Muzorewa (the first black prime minister of Zimbabwe), Sam Walton, a brief encounter with the King of Yugoslavia, and so many of God's great children. He was on the finance committee for the formation of Carl Sandburg College in Galesburg, IL, and founded a hospice program for Pittsfield, IL. He also was instrumental in the creation of a bill in the Illinois Legislature to support the mentally/physically handicapped youth in the "forgotten years," 18-20 years old, and it passed. He worshiped with and met Oral Roberts and Robert Shuller. He worked with the building of 3 new churches, drove a school bus for many years, and helped start a PTA in Illiopolis and served as its first president. He helped organize and coached Little League for several years. He also started an ambulance service at both Knoxville and Annawan, IL. One Sunday he brought an unprecedented 45 confirmands into church membership. There was no time for a sermon that Sunday.

He has served 22 churches pre-retirement and several more after retirement as an interim pastor, guided two parishioners to enter the ministry, preached more than 4900 sermons, had more than 620 weddings, more than 350 baptisms, and received more than 1,060 new members into the church. He never met anyone that he didn't like and he tried to live by Robert Schuller's advice: using the power of positive thinking (Norman Vincent Peale), "find a need and fill it, find a hurt and heal it."
He was proud that religion has played a part in his children and grandchildren's lives. His oldest son and daughter-in-law, as well as his grandson, have even gone into the ministry and his granddaughter has worked as a missionary.

His best advice when people were frustrated with others at work was, "Just love them." It made one stop praying for oneself so much as to pray for the clients and personal love and tolerance, and that made all the difference.

A funeral for the family will be held at the Wyoming United Methodist Church on Wednesday, July 15, 2020, presided over by the Rev. Rebecca Klemm, but the public is invited to a ½ hour visitation preceding the service from 11 to 11:30 a.m. The funeral will be recorded and available to watch on YouTube under the name "Funeral of Reverend Prosper Tournear" by the following day. Haskell Funeral & Cremation Services in Wyoming is in charge of arrangements. On Saturday, July 18, 2020, at 1 p.m., there will be a memorial service at Greenmount Cemetery in Quincy, IL, for extended family, followed by fellowship in the park pavilion across the street. Duker & Haugh Funeral Home in Quincy will oversee the burial.

Memorials may be sent to the Preachers' Aid Society and Benefit Fund in Springfield, IL (helps retired pastors); and/or the American Heart Association.