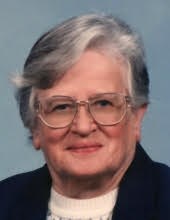 Rebecca G. Brewer, 92, of Mount Vernon, Illinois passed away at 5:03 P.M. Thursday, September 15, 2016 at SSM Health Good Samaritan Hospital in Mount Vernon, Illinois. She was born Saturday, September 22, 1923 in Beaver City, Nebraska to parents, Robert Allen and Margaret Ellen (Childs) Giles. The family lived for a short time in LeRoy, Kansas in 1930 and 1931 and then moved to Galseburg, Illinois. She first married Reinhold Hohn on July 3, 1960 and he preceded her in death in February 1963. She second married Edgar Dixon in February 1970 in Champaign, Illinois and he preceded her in death in November 1980. She most recently married Floyd Brewer on February 11, 1983 in Mount Vernon, Illinois and he preceded her in death on April 3, 2004.
A Memorial Service will be held at 11:00 A.M. Monday, September 19, 2016 at First United Methodist Church in Mount Vernon, Illinois with Reverend Victor Long officiating.
In honor of Rebecca's wishes her body will be donated to Saint Louis University for medical research.
A Greeting of Family and Friends will be held from 10:00 to Service Time 11:00 A.M. Monday, September 19, 2016 at First United Methodist Church in Mount Vernon, Illinois.
Rebecca is survived by her two daughters: Pamela O'Rourke and husband Ed of Mount Vernon, Illinois and Eugenia Sampat of Hanover Park, Illinois, four grandchildren: Jennifer O'Rourke of Americus, Georgia; Christine O'Rourke Peimann and husband Phil of Saint Louis, Missouri; Kelley O'Rourke Houseworth and husband David of Casper, Wyoming; and Mary O'Rourke-Hines and husband Aaron of Dupont, Washington, and four great grandchildren: Kathleen O'Rourke; Jacob Houseworth; Aiden Houseworth; and Aubrey Hines.
Her parents, three husbands, sister, Elisabeth Born, brother, Robert Giles, and son-in-law, Vijay Sampat preceded her in death.
Rebecca was graduated from the Galesburg Senior High School in 1941. She received her Bachelor of Arts degree from McKendree College in 1947, received her Master's degree from Columbia University in 1958 and the Doctor of Philosophy from the University of Illinois in 1973. She also studied at London University in London, England and the University of Michigan. In 1948 Rebecca answered the challenge of General Douglas McArthur for young people from the United States to go to Japan for a three year term. At the end of that term in 1951, she enlisted in the Missionary program of the Women's Division of the Methodist Church and returned to Japan as a commissioned Missionary in which capacity she remained until the summer of 1960. On July 3, 1960, Rebecca married Reinhold B. Hohn (a retired professor from McKendree College) and moved to Gravois Mills, Missouri, where they were engaged in the production of broiler chickens. Upon the death of Reinhold in February of 1963, she moved to Michigan for graduate work in English as a Second Language. In 1964 Mrs. Hohn was employed by the University of Illinois in the Division of English as a Second Language, where she later became an assistant professor. During her first year at the U of I, she lived in Philo, Illinois, in 1964 and 1965, overseeing the home and family of Dr. Franz Hohn (a Professor of Mathematics at the U of I) who was a visiting professor in Holland that school year. In 1965 Rebecca purchased and moved into a home in Champaign, Illinois. On March 13, 1970 she married Edgar N. Dixon, who died in November 1980. On February 11, 1983 the Reverend Floyd Brewer and Dr. Rebecca Dixon were united in marriage in the First United Methodist Church of Mount Vernon by Dr. Jack B. North. Rebecca continued at the University of Illinois until her retirement in early 1984 and commuted weekends to Mount Vernon until her retirement. Since retirement Rebecca has served in many volunteer capacities. Among them are the following: President of the Vandalia District United Methodist Women; President of the Jefferson County Historical Society 1990, 1991, and 1992 - during that time land was secured for the Historical Village and the first buildings were moved in or built - the Village was opened to visitors in 1992; 1993 to the present, chairperson of the Museum Committee of the Jefferson County Historical Society; member of the Board of Directors of the Jefferson County Historical Society 1993 to the present; member of the Board of the Alumni Association of McKendree College; currently a member of the Board of Trestees of McKendree College; member of the search committee for the president of McKendree College 1994; 1995 chairperson of the inauguration committee for Dr. Jim Dennis when he became the president of McKendree College; coordinator for First United Methodist Church's participation in the meal program at Friendship of Faith Church in Mount Vernon at the present time; currently a member of the Administrative Board of First United Methodist Church of Mount Vernon, Illinois; currently serving as a member of the Pastor/Parish Relations committee at First United Methodist Church; member of the United Methodist Women, First United Methodist Church; and member of the Pioneers Group at First United Methodist Church.
For those who wish, memorials may be given to the Jefferson County Historical Society or to First United Methodist Church and will be accepted at the funeral home or mailed to Hughey Funeral Home, P.O. Box 721, Mount Vernon, Illinois 62864.
Arrangements have been entrusted to the care of Hughey Funeral Home where you may call (618) 242-3348 or visit www.hugheyfh.com for further information and to send condolences.