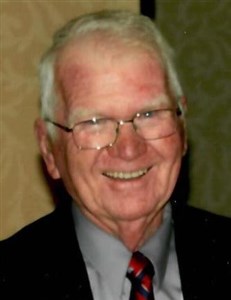 Robert was born on October 11, 1930 in Mt. Vernon, Illinois, a son of Fred and Wilma Fitts.  He graduated from Mt. Vernon High School during which time he also worked steadily at his father’s Mobil Gas Station.

Bob married Mildred Dyel in June of 1950.  Three children were born to this union including Robert Jr., Cheryl Ann and Terry Brian.  While in high school, Bob and some buddies decided to join the National Guard, planning to get paid to attend camps in the summer.  Soon thereafter, camp moved to Korea in the winter.  Bob served as Master Sergeant for the unit keeping the vehicles running during the war.  Upon getting discharged, he attended McKendree College in Lebanon, Illinois and seminary in Naperville, Illinois.  In 1963 he graduated with a Master of Divinity Degree, was ordained and served over 25 United Methodist Churches in Central Illinois.

Bob spent many years recognizing Korean War Vets.  He started a local KWVA Chapter and eventually served two terms as state KWVA Commander.  He was then elected as a director for the National KWVA Board of Directors.

He was preceded in death his son, Robert Fitts Jr. and brothers, Roy Lee Fitts and Billy Fitts.

Online condolences, memories and expression of sympathy may be left for the family at wheelanpressly.com