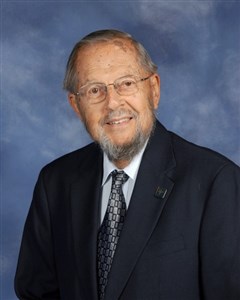 Ronald Richard Seibert, 89, of Collinsville, Illinois passed away Monday, October 29th, 2018. He was born August 10th, 1929 in Chicago, Illinois to Walter and Mildred (Stout) Seibert. He is preceded in death by his parents.

Ron graduated from McKendree College in Lebanon, IL in 1951 and received his Masters of Divinity from Temple University in Philadelphia in 1954. Ron was an ordained United Methodist minister for 38 years in the Illinois Great Rivers Conference, serving as the campus minister at Southern Illinois University in Carbondale for 17 years, and at Western Illinois University in Macomb for 20 years. He influenced hundreds of college men and women, helping to shape their faith and inspiring many to enter the ministry. He led students on dozens of mission trips including El Paso, TX, Boston, MA, New Orleans, LA, and Haiti. He also served as pastor of Immanuel United Methodist Church in Edwardsville, IL for one year. Ron retired in 1992 and he and Maurine settled in Collinsville, IL.

One way Ron lived out his faith was by marching and speaking out for social justice. He participated in the 1963 March on Washington, and heard Dr. King give his “I Have a Dream” speech. He was still speaking out at age 88 by attending a march in downtown St. Louis promoting common sense gun legislation.

Ron was a passionate concert-goer. He attended hundreds of live concerts over the years, ranging from rock, pop, country, and folk, to blues. He was an avid sports fan and took many trips on the Metrolink to see his beloved Cardinals play. Ron and Maurine traveled extensively. Favorite destinations included Rocky Mountain National Park and Ft. Myers Beach, Florida.

Interment will follow on Monday, November 5th, 2018 at 10:30 am at Ashley Cemetery, Ashley, Illinois.