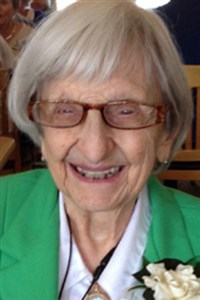 She was born in Wichita, Kan., and grew up in Topeka. She earned a music degree from Baker University, Baldwin, Kan., and was offered a scholarship to Garrett Biblical Institute as chapel organist. She met and married fellow student Charles Huff Junk, who became a Methodist minister in 1940. After her husband's accidental death in 1949, she supported herself and four children working as a musician, church worker and certified professional secretary, retiring from the Illinois Agricultural Association in 1981.

Using her retirement funds and gifts from friends, she traveled to Africa, China, Italy, the Caribbean, Alaska, Scotland and Ireland. Ruth directed her energies to volunteer work, including Crossroads Global Handicrafts Shop, Habitat for Humanity, BroMenn, Alzheimer's Association and Westminster Village to name a few. She used her musical gifts to lift the spirits of countless groups, right up to her 101st year of life, and composed a book of melodies and verses. Her artistic photographs adorn the hallways of Westminster Village, where she was one of the original residents.

She was preceded in death by her husband; infant son; brothers, Verne and Verle Wagner.