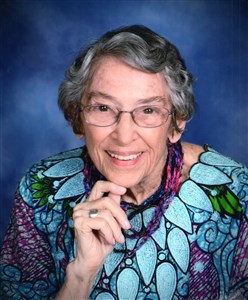 Born Sarah Ann Gould near the Collingwood Circle in Farmingdale, New Jersey, “Sally” graduated from Eatontown High School in 1941, followed by Bucknell College in 1945.
After teaching Latin for three years, she married Fay Henry Smith and started the life of a pastor’s wife. After serving in the Methodist church in Farmingdale for 8 years, she and her husband moved and worked with small churches in Illinois. From 1972-1984 Fay and Sally served as United Methodist missionaries in Zaire, Africa where she followed the flights of mission planes on a high frequency radio, their only contact with the ground since there were no navigational aids for pilots in Zaire.
Teaching remained a constant throughout her life. She taught English as a second language in Africa and in Nashville, Tennessee after obtaining a Master’s Degree in the field.
Sally’s joy was contagious when anyone witnessed her singing, be it as a soloist or in a choir. And if you played a game with her, you knew that her wit and humor were complemented by her competitive spirit.
In 1995 she remarried Jacob Lewis, a physician in Freehold. After he passed, she remained near her birthplace and began a newsletter. For the following 25 years, she sent a daily inspirational message to all who might be inspired. Her last message, paraphrased…”I have had a full and fulfilling life. I am tired now, but I still want to do more.”
Sally is survived by her children, Richard, Maryliz and Stephen; her grandchildren, Mark, Hosanna and Caleb; and her great-grandchildren, Thomas and Miranda Fletcher.
A memorial service will be held at the First United Methodist Church of Freehold, 91 West Main Street, Freehold on Sunday, August 21, at 1:00. In lieu of flowers, the family suggests a donation to an organization important to Sally: Wings of Caring, First United Methodist Church of Freehold, or the Oakley Farm Museum in West Freehold.