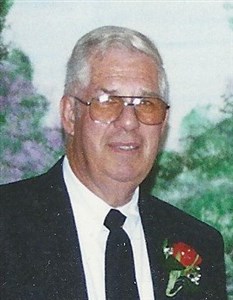 Bill grew up in Michigan where he spent summers from a young age working on his uncle's farm and where he excelled on the swim team in high school before moving to Assumption, IL, for his senior year.  Since Assumption had no swim team and because Bill was tall and stout, he played football.  He graduated from Assumption High School in 1948.  Following graduation, Bill traveled with his dad working for Spartan as a salesman.

Bill became a State Farm Agent who insured many people's vehicles, homes, and lives in Auburn and surrounding communities over 35 years of service.  He served on the board of education for the Auburn school district. He coached youth baseball and was the catcher on an Auburn fast pitch softball team.

He was a member of the Auburn United Methodist Church where he served on many committees and served as a lay minister. Bill also served at length as a lay minister for many churches in the area including Thayer UMC, Divernon UMC, and New Hope.

Bill loved golf...loved to play golf, teach golf, talk golf, coach golf, watch golf on TV.  He was a golfaholic.  He also fancied himself a hobby farmer.  He bought a farm south of Waverly where he could grow world class cocklebur and jimsonweed.

Bill was preceded in death by his parents; a sister, Mary Alice; twin brothers, Larry and Barry; and his youngest son, Bob.

A private family memorial service will be held (due to Covid-19) on Saturday, February 13, 2021. Burial will follow in Pleasant View Cemetery, Assumption, IL. In lieu of flowers, donations can be made to Auburn United Methodist Church, 14100 N State Rt 4, Auburn, IL 62615 or Land of Lincoln Honor Flight, 57 Country Place, Springfield, IL 62703.