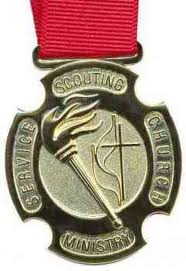 Nominations are being sought for the Torch Award, recognizing adult leaders who have given exceptional service in the use and promotion of the programs civic youth serving agencies or scouting, (Boy Scouts, Girl Scouts, 4-H Clubs, Camp Fire Boys and Camp Fire Girls.)

The Torch Award recipient shall:
Local churches who charter Scout units are encouraged to check to see if any adults in units qualify. Nominations may be submitted at any time during the year to: Office of Connectional Ministries, Attention: Rev. Dr. Thomas Logsdon, UMM Liaison, P.O. Box 19207, Springfield IL 62794-9207. Nominations must be received by April 1 to be considered, those received after that date will be considered the following year.
Contact either conference scouting co-coordinator: Raymond Gessel at 309-688-1508, or Dennis Luessenheide at 618-288-5251 for an application for the Torch Award.